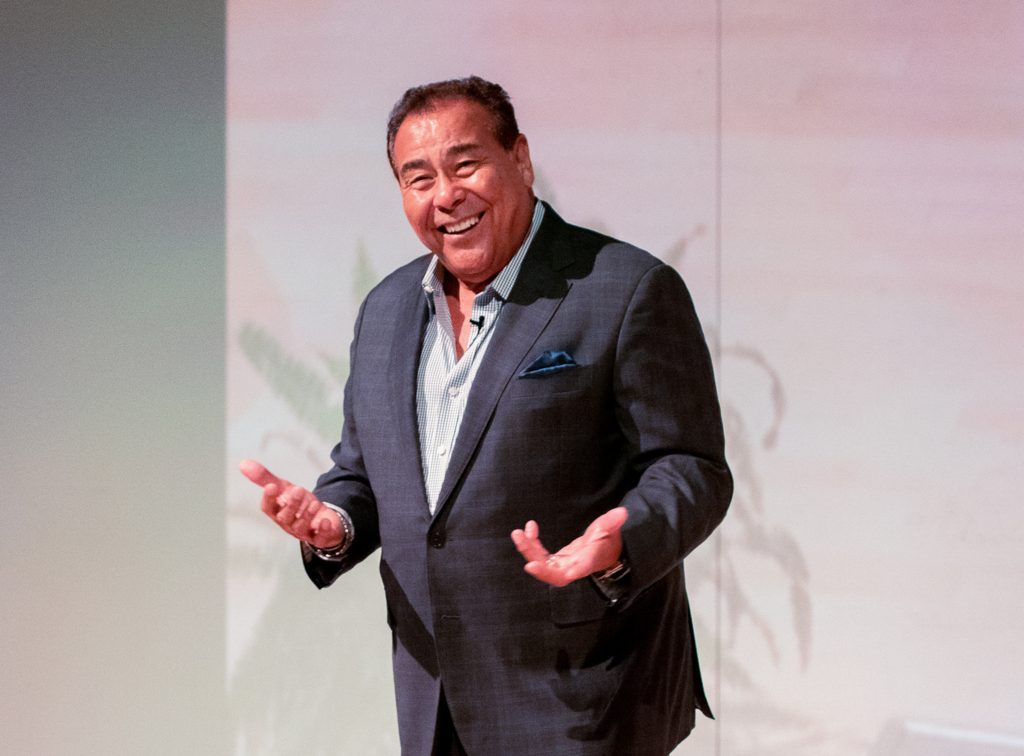 John Quiñones, seven-time Emmy Award-winning journalist and host of “What Would You Do?” presented Thursday at the Lyceum as the inaugural speaker for the university’s Division of Inclusion, Diversity, Equity, and Access Lecture Series.

Students and staff filled the Lyceum as IDEA Assistant Vice President Teresa McKinney took the stage to introduce the speaker series. IDEA chose Quiñones in honor of Hispanic Heritage Month because he is a Mexican-American from San Antonio, Texas.

“Last spring, we had this amazing idea to develop a speaker series that would acknowledge and acknowledge the diverse groups of [university] faculty, staff, students, alumni, community members and celebrate their unique heritage,” McKinney said.

She said it took them a long time to find the perfect speaker to start the series. IDEA wanted someone who represented the goodness of humanity.

“Quiñones literally became the face of doing the right thing for millions of fans,” McKinney said.

Before Quiñones takes the stage, a brief preview of “What Would You Do?” play. As he stepped onto the podium, the audience gave him a standing ovation. He said he was happy to be back in his home state of Texas.

“I am truly impressed with UNT’s commitment to finding ways in which we can all contribute to social justice, diversity, equity and inclusion for all,” Quiñones said during the his speech. “I can relate to that and I can connect to it better than anyone because I wouldn’t be here if it was [were not] for people who have fought for the representation of Latino journalists on television.

Quiñones participated in the creation of “What would you do?” because he wanted to put a mirror on American society and the dark side that people would rather not hear about. The pandemic seemed to put everyone on their last nerve, he said.

“I have never seen this country as divided as it is today and I grew up during the civil rights movement,” he said. “All you have to do is browse the internet, right? Or watch TV and watch these ugly videos going viral, people arguing, you know, Confederate symbols, arguing over Black Lives Matter or Blue Lives Matter.

Growing up, Quiñones said he spoke Spanish and knew his family was poor. Her parents both worked in low-paying jobs to support herself and her two sisters. People assumed her parents had crossed the border despite seven generations of her family living in Texas.

He could afford to go to college through the Upward Bound program, which helps low-income students get an education. He held three jobs, including one as a delivery boy for a pharmacy. He practiced reporting by recording himself in the pharmacy bathroom until he was discovered by an older colleague who put him in touch with a local radio station.

“No matter what you’re heading into, do an internship there,” Quiñones said. “So you can get a taste of what it’s like.”

Quiñones entered Columbia University and fought to stay there applying for loans and scholarships until he finally won a scholarship. He earned a master’s degree which led to his first television job in Chicago. He told the students how he covered up illegal immigration by going undercover and helping seven workers obtain temporary visas.

“The reporter, he or she, is the person with a little candle or the little flashlight and he can shine it in the darkest corners of the room to light up injustice, light up corruption, light up violations of human rights,” he said.

The story won him his first Emmy award which he called most special. Before doing “What would you do?” he covered stories for ABC all over Latin America. After a script from the show illustrating racism was shown to the public, he began telling behind-the-scenes stories. A story about a homeless woman on the show went viral and showed her that people were ready to help each other no matter the material reward.

“She did it because, as my dear mother Maria would say, her corazon, her heart, told her it was the right thing to do,” Quiñones said.

The audience applauded before starting to ask Quiñones questions. Merchandising professor Marissa Zorola was unable to attend the event in person, but her son, freshman criminal justice student Gabriel Sanchez, put her on the microphone via his phone. Zorola said she shared a similar experience to Quiñones — she attended the same high school in San Antonio and her parents were uneducated.

Quiñones thanked her before answering further questions. He gave advice to students about going through periods in their lives when they feel like they are not accomplishing anything. He told them to reach out to successful workers in their fields.

“Don’t be afraid to approach people who have been there— who are here now — because I think you’d be surprised if they agreed to talk to you,” he said.

He also answered questions about his favorite food or storylines his family had participated in on the show. He was also proud to say that his three children were all involved in the media. He moved on from the Q&A segment, ending his stage time with a fun story.

“He’s just such a good public speaker, and I’m just grateful this is a free opportunity for us,” said Danny Flores, social work manager. “When’s the next time we’ll be in the same room as John Quiñones?”

The featured image: President John Quiñones addresses the crowd during the IDEA Keynote Series on September 22, 2022. Photo by Charles Farmer