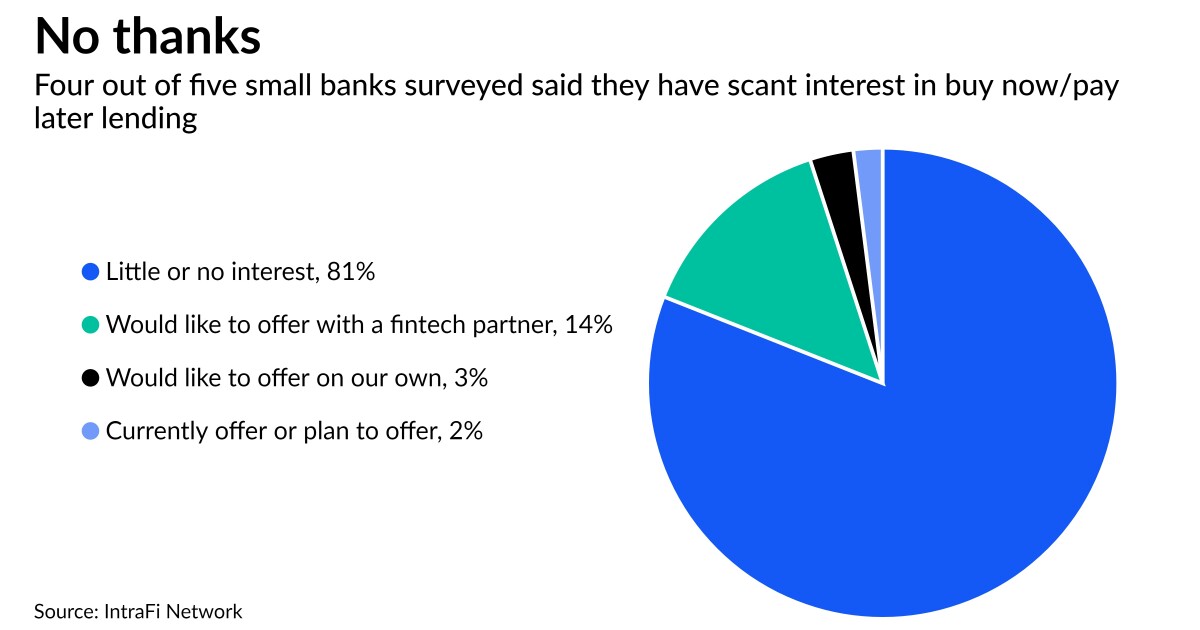 About eight in 10 community bank executives have ‘little or no interest’ in offering consumer installment loans, according to an IntraFi Network survey of key executives at banks with up to $10 billion in business assets.

Some 14% of executives said they would like to offer the loans in partnership with an outside fintech company, rather than doing it alone. Only 2% of respondents said they already offer the service or are actively planning to do so.

“Banks aren’t lining up to offer BNPL, and those that do would prefer to partner with a fintech,” said Paul Weinstein, senior adviser at IntraFi.

Worldwide, the buy-now/pay-later boom reached more than $100 billion in loans last year, according to Cornerstone Advisors. Major providers include PayPal, Affirm, Klarna and Afterpay, which is being acquired by Block, the company formerly known as Square.

Buy-it-now and pay-later providers often allow consumers to pay for purchases at checkout in four interest-free payments, even with little or no credit history.

Merchants pay providers a fee, often a percentage of the transaction up to 8%. Consumers who miss payments are often charged late fees, which can be another source of revenue.

Some major banks, including Goldman Sachs and Capital One Financial, got into the business as a way to boost non-interest income at a time when interest rates were held near historic lows.

But other banks are more skeptical of the fast-growing product. Cullen/Frost Bankers, a $50.9 billion asset company in San Antonio, Texas, has an aggressive organic growth plan, but it doesn’t include buy now/pay later business, according to the CEO Phil Green.

“What could go wrong there, right?” Green said in a recent interview.

In December, the Consumer Financial Protection Bureau announced a survey of five buy now/pay later businesses. The bureau said it asked Affirm, Afterpay, Klarna, PayPal and Zip for information about their practices and how their offerings could affect consumer debt levels.

The IntraFi survey, which was conducted in early January, took the pulse of CEOs, CFOs and other executives at 426 small banks.

It showed that some bankers expect the easy flow of deposits to begin to slow. Around 40% of respondents said they thought deposit competition would increase moderately in 12 months, compared to 29% who had given the same forecast three months earlier.

“There’s going to be a tighter market for deposits,” Weinstein predicted.

More than half of executives surveyed said they expect demand for loans to increase at least moderately over the next year. But it could take time for the industry’s suppressed loan-to-deposit ratios to return to normal. Demand for loans has been reduced during the COVID-19 pandemic as consumers and businesses have used government stimulus funds to build up reserves.

About 43% of small bank executives surveyed said they expected loan-to-deposit ratios to return to pre-pandemic levels in 2023, while 39% said it wouldn’t happen until 2024 or later. .

IntraFi’s findings also suggest the pandemic may have changed how smaller banks view their branches. Among banks that have closed branches since the start of 2020, around 53% of respondents pointed to a lack of foot traffic due to increased use of online banking options by customers.

“COVID is not identified as the primary reason,” Weinstein said. “But it is clear that the virus has accelerated digital channels so that you no longer have to go to your agency. People have become much more comfortable with online banking.”